Customers of high street beauty salons that provide lip and facial fillers are being left with ‘bruises, infections and in A&E’ as doctors call for tighter regulation

Plastic surgeons are demanding tighter regulation over dermal fillers, which are used to reduce wrinkles in the face and plump up lips.

Currently, the injections, which can cost as little as £99 in high street beauty salons, can be administered by practitioners with little training in the UK.

But MPs, backed by The British Association of Plastic, Reconstructive and Aesthetic Surgeons, are set to challenge the rules over dermal fillers today.

Alberto Costa, MP for South Leicestershire, spoke of his concern over the lack of regulation over non-surgical treatments.

Tighter rules on dermal fillers in the UK will be discussed in government as complaints have almost tripled in two years, data shows

Mr Costa was alarmed to hear a constituent, Rachael Knappier, had experienced side effects after having dermal fillers.

He said: ‘Not only was I shocked to hear Rachael’s experience but similarly I was very concerned to hear that there are almost no regulations or safeguards in place for those who receive these kind of non-surgical treatments.’

In 2018, there were 934 complaints about non-surgical procedures. Botox and fillers make up around nine out of 10 non-surgical treatments performed in the UK.

In comparison, there were 378 complaints in 2016, according to a report last year from Save Face, a government-approved register of accredited practitioners.

Dermal fillers are currently classified as ‘medical devices’, but Botox is classed as a medicine.

Dermal fillers have not undergone the same level of clinical trials. All that is needed for it to be administered is consent from the patient.

In the US, only ten dermal fillers are approved for use by the FDA, but in Europe, the number of lip and face plumping gels used is closer to 160.

With loose regulations, the injectables can be administered by people with little training, and easily accessible by people, experts have long warned.

Niall Kikpatrick, a BAPRAS member, said the products used by the practitioners were often ‘cheap, even bought from the internet, and unregulated’.

The craniofacial plastic surgeon at The Portland Hospital said: ‘I see significant complications arising from the use of dermal fillers in almost every clinic I hold.

MOST HAVE BOTOX TO GET A ‘COMPETITIVE EDGE’ AT WORK

The boom in Botox is being driven by patients wanting to look better at work, a small survey found last August.

To get a better idea of the trend, researchers at Northwestern University polled 511 people to get an idea of what’s motivating them, in the first multi-center observational study ever performed.

They found one of the most common reasons for patients getting Botox or fillers was to look ‘better’ in a professional context, while those who wanted the procedures for themselves were in the minority

Dishearteningly, the vast majority (69.5 per cent) had turned to cosmetic surgery ‘not simply to look attractive, but to address serious psychological and emotional issues’.

‘Due to a lack of patient records however, it is often difficult to track exactly which materials have been injected into the patient and by whom.’

Dr Tamara Griffiths of the British Association of Dermatologists said: ‘Dermal filler injections have been trivialised as just a “beauty” treatment, but chronic, life-ruining complications can occur if they are not used properly.

‘Tightening up the regulations around fillers would make it harder for untrained individuals to get hold of them in the first place.’

Simon Eccles, a specialist in complex craniofacial surgery at Chelsea and Westminster hospital, said: ‘Most patients that come to see me with filler complications have not been informed of the risks.

‘There needs to be a greater push for education for both the public and for those administering the filler injections.’

Mr Eccles said there is also a rise in people going abroad for treatment, returning to the UK with problems that need fixing on the NHS.

A Daily Mail investigation in 2017 revealed rogue beauticians were widely advertising cosmetic procedures with few checks in the UK.

Treatments – often given by beauticians or hairdressers, sometimes at ‘Botox parties’ – are often offered via social media and with discount vouchers.

And cosmetics chain Superdrug now offer the skin treatments to customers aged over 25, with prices starting at £99, in their London stores. It says its nurse that administers the injections is fully trained.

But customers must be psychologically assessed with a questionnaire to see if they are mentally fit to have the service.

The growth in popularity has also been attributed to normalisation of its use in celebrities, such as reality TV stars who talk openly about their experiences.

Experts have stressed the importance of educating people on the risks for reducing the number of complaints.

Safeguards have already been put in place by the NHS after Superdrug’s announcement of cosmetic procedures in August received criticism.

Rachael Knappier, 29, saw her lips swell after having fillers in her friends living room. She only intended to have the wrinkle-erasing injection in her forehead but, after a few glasses of Prosecco, decided to have her lips plumped at a cost of £220 at the end of August.

The beautician mistakenly injected the filler into an artery, which caused her mouth to swell within hours, cutting off the blood supply to her lips.

After being sent home from A&E, Ms Knappier, of Leicestershire, took it upon herself to contact a cosmetic-surgery expert, who warned she may lose her top lip if the tissue started to die.

Three days later, Ms Knappier was left screaming in pain while doctors injected her lips with a dissolving agent. Three months on, her mouth is almost back to its normal size. 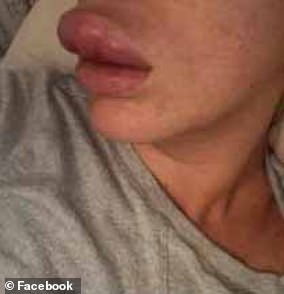 Pictured at their worst, experts told Ms Knappier the beautician likely injected the filler into an artery, which could have caused the tissue to die and meant she nearly lost her top lip

Ms Knappier said: ‘There was fizz and cake and it was a bit of a conveyor belt with girls sitting in the kitchen waiting their turn with local anaesthetic cream on their faces,’ she told The Sun.

‘The beautician – who I assumed at the time was a nurse – didn’t ask me to sign any consent forms so alarm bells should have rung. But being at a party with friends took away all the seriousness of having filler injected into my face.’

Once the reaction set in, a panicked Ms Knappier Facetimed the beautician in distress, who told her to get to A&E. While there, doctors reportedly told her she was not having an allergic reaction and should have the filler dissolved by a beautician.

The owner reportedly told her it looked like the filler had been injected into an artery, which can kill the tissue if its blood supply gets cut off.

With her lips almost back to normal, Ms Knappier said she will never attend a Botox party again and just assumed people who inject fillers have been to medical school. 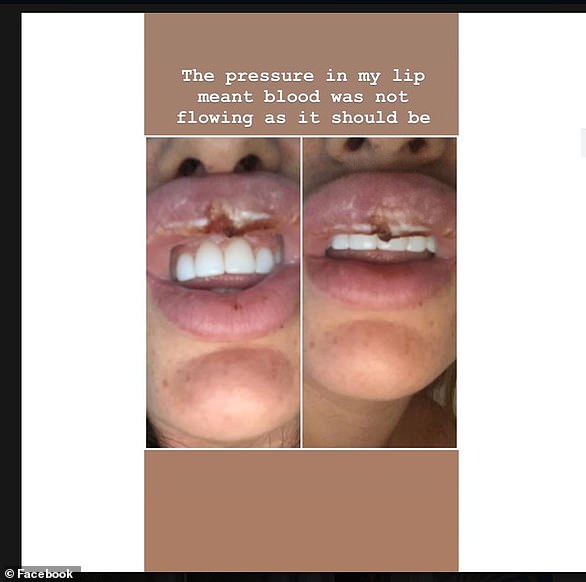 Writing on Facebook, Ms Knappier told her followers the pressure from her severely swollen lips meant her blood was not circulating as it should, which could have caused the tissue to die

New Paper Examines How Gender Bias in Health Care Can Be Deadly – Rewire.News

Are men in denial about hair loss? – Philippine Star